A Tale of Two Richards 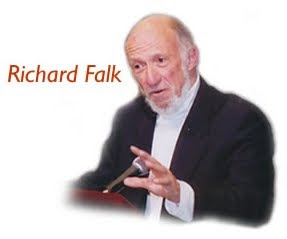 ".....Richard Falk, professor emeritus at Princeton University and UN Special Rapporteur on the situation of human rights in Palestinian territories occupied since 1967, has been attacked by Israel for years. But now, in a new twist, he is being hung out to dry by the Palestinian Authority. This, perhaps, the unkindest cut of all.

The PA pummeling is more discreet. It has quietly suggested to Falk himself that he resign. One reported reason is that Falk can't do his job because Israel will not allow him into the country -- though this should, one would have thought, be all the more reason to defend him.
And the PA has asked the Human Rights Council to take Falk's report off the March 22 agenda and "postpone" it to June, which the Council has done. The PA-appointed representative to the UN in Geneva insists that there are simply more important reports than Falk's on the agenda -- yet at the same time he says the PA has "many" reservations about the Falk report. The real reasons seem to be that the PA did not like the mention of Hamas in Falk's report and his earlier criticism when the PA tried to "postpone" the Goldstone Report in September under pressure from Israel and the United States. A public outcry among Palestinians reversed that decision.....

If the attacks on the two Richards succeed, the Palestinian cause will suffer and the world will be a poorer and more dangerous place -- one in which the might of the strong is legally allowed to prevail against the rights of the weak."
COMMENT:
If the PA is a "Palestinian Authority," then I am not a Palestinian; I do not want anything to do with these bastards, not even the name.
Posted by Tony at 7:09 AM