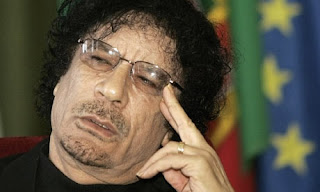 "This month's Arab League summit hosted by Libyan leader Muammar Gaddafi in Tripoli has hit a snag. Lebanon is threatening a boycott over the mysterious disappearance of a renowned Lebanese political and religious figure 32 years ago. The inscrutable Gaddafi may have skeletons in his cupboard on this controversy....

Gaddafi has already threatened to expel the 20,000 Lebanese nationals living in Libya should a boycott take place and institute other "painful" measures as necessary. This notwithstanding, Lebanon should still boycott the summit. Although historically nothing of substance has ever emerged from these gatherings, Lebanon now has the opportunity to send a powerful message before it even convenes.

With a boycott, it would say that the lives of great men who were instrumental in uplifting the downtrodden, who crossed sectarian lines to promote communal harmony, who fought for the betterment and welfare of the Lebanese people, will never be forgotten.

For a country that has endured so much in the way of civil strife since the disappearance of Imam Moussa al-Sadr, the leaders of the 21 other members of the Arab League would do well to appreciate what Lebanon has to say about justice and principle."
Posted by Tony at 6:34 AM