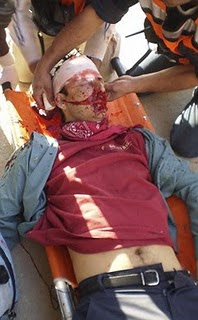 "Dozens of protesters were treated for the effects of tear gas inhalation, this Friday, following the weekly demonstration in the southern West Bank village of Nil’in, near Ramallah.
Nil’in’s weekly protest continued, this week, with ongoing support from members from the international and Israeli communities. After midday prayers at lands slated for confiscation, the protesters moved forward to the already confiscated lands, where owners attempted to plough.

When the protesters arrived at the gate of the wall, the Israeli military responded to their presence with a volley of tear gas canisters and stun grenades. Following the storming of the protesters, one farmer was detained by the troops.

During the protest March banners and flags were displayed, along with photos of Tristan Anderson. Tomorrow marks the anniversary of Mr. Anderson’s serious injury during an anti-wall protest in Ni’lin.

Mr. Anderson was shot in the head by a tear gas canister by a member of the Israeli military, requiring the removal of part of his frontal lobe, initially, and further surgeries in an attempt to correct ongoing fluid leakage in his brain. Mr. Anderson remains in a critical condition at Sheba Medical Center one year on from his near-fatal wounding, and Israeli daily, Haaretz revealed, this week, that the state of Israel would reopen investigations into the incident......"
Posted by Tony at 6:41 AM