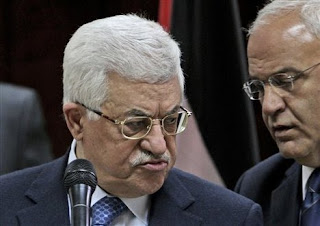 "...After months of effort, the US managed to bludgeon and cajole Abbas and certain "moderate" Arab states into backing "indirect talks" between Israel and Abbas, even as Israel escalates its ethnic cleansing of Jerusalem, its colonization of the West Bank, its blockade of Gaza and its daily rounds of murders and kidnappings of Palestinians throughout the occupied territories. Even this meager achievement seemed in doubt after Netanyahu's government brazenly announced an additional 1,600 Jewish-only homes during a visit to Israel by US Vice President Joe Biden....

Amid this dismal situation, comes a new paper by Saeb Erekat, senior aide to Abbas, and "chief negotiator" for the US-backed Ramallah Palestinian Authority (PA).

The 7,000-plus word document, produced by the Negotiations Affairs Department of the Palestine Liberation Organization (NAD-PLO), is clumsily titled "The Political Situation in Light of Developments with the US Administration and Israeli Government and Hamas' Continued Coup d'etat: Recommendations and options." (NAD-PLO is actually administered by the Adam Smith Institute, "the UK's leading free market think tank," and funded entirely by Western governments.).... [Download the NAD-PLO's report [PDF]]

Nevertheless, a key concern does emerge: Erekat is very worried that the US will pressure Abbas to resume negotiations from scratch, instead of from the point at which they ended in December 2008 with the previous Israeli government headed by Ehud Olmert....

Moreover, the Erekat paper makes no mention whatsoever of the "right of return" -- a fundamental consensus demand of Palestinians inside the country and in the diaspora -- but refers vaguely to a "just and agreed solution in accordance with UN [General Assembly Resolution] 194." It does not call for implementation of the resolution....

As far as territory is concerned, the paper reveals that Abbas conceded Israeli demands to annex large settlement blocs all over Jerusalem and across the West Bank. Once this concession is made, all the bluster about the "1967 border" being a sacred line behind which Israel must withdraw becomes meaningless.....

The Erekat paper provides insight into the thought processes of a "leadership" that has not only lost all legitimacy, but does not dare to even to speak about the rights of the people it purports to represent. Indeed, it holds those people and their rights in utter contempt....

Apparently aware of the utter lack of credibility that the Ramallah Palestinian Authority and the Abbas-controlled skeleton of the PLO have, the Erekat paper proposes a sort of PA hasbara campaign among the Palestinian diaspora in Europe, the Americas and Asia, "to confirm the unified and legitimate representation by the Palestine Liberation Organization (PLO) wherever they are." .....

In other words, the Abbas leadership wants to export its civil war to the diaspora. Indeed, we have already seen this effort begin with the attempted launch of the Abbas-controlled "Palestine Network" aimed to divide and co-opt Palestinian activists ("USPCN: 'Palestine Network' is a PA Attempt to Divide the Palestinian People and Surrender their Rights," 20 November 2009).

Nowhere of course does the Erekat paper actually propose reviving and democratizing the PLO and really involving Palestinians whose voices have been so long shut out by the corrupt and oppressive Oslo clique. It does not recognize or mention the growing civil society-led campaign for boycott, divestment and sanctions (which scares Israel much more than Erekat's barking), and mentions the one-state solution only in passing without acknowledging the serious work that has already been done to develop and disseminate this idea.

This is not surprising; to acknowledge any of that would be to admit that the fiction of US-brokered negotiations is over, that those who acted in it and benefitted from it for so long have already done all the damage they can do to the Palestinian people and their rights, and that they should leave the stage."
Posted by Tony at 10:35 AM