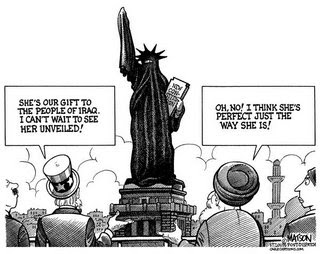 By Abdu Rahman and Dahr Jamail

"BAGHDAD, Mar 12, 2010 (IPS) - Under Saddam Hussein, women in government got a year's maternity leave; that is now cut to six months. Under the Personal Status Law in force since Jul. 14, 1958, when Iraqis overthrew the British-installed monarchy, Iraqi women had most of the rights that Western women do.
Now they have Article 2 of the Constitution: "Islam is the official religion of the state and is a basic source of legislation." Sub-head A says "No law can be passed that contradicts the undisputed rules of Islam." Under this Article the interpretation of women's rights is left to religious leaders – and many of them are under Iranian influence. 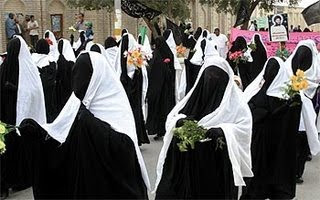 "The U.S. occupation has decided to let go of women's rights," Yanar Mohammed who campaigns for women's rights in Iraq says. "Political Islamic groups have taken southern Iraq, are fully in power there, and are using the financial support of Iran to recruit troops and allies. The financial and political support from Iran is why the Iraqis in the south accept this, not because the Iraqi people want Islamic law."......"
(Right: University graduation ceremony in Basra)
Posted by Tony at 4:41 AM