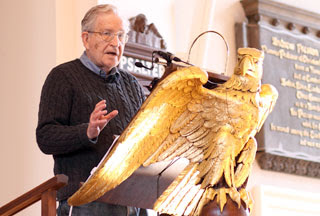 "US scholar Noam Chomsky blames hostile US and Israeli actions as a major factor in a potential Iranian decision to develop a "nuclear deterrent."

Addressing the audience in Harvard Memorial Church on March 6, Chomsky opined that constant US threats of military action against Iran may lead Tehran to perceive a need to develop a nuclear weapon.

“If they're not developing a nuclear deterrent, they are crazy,” he asserted. The problem, said Chomsky, is the defiant and hypocritical insistence of the United States on holding the constant threat of military action over Iran as a punishment for its noncompliance with United Nations mandates.

“Hostile actions of the United States and its Israeli client are a major factor in Iran's decision on whether or not to develop a nuclear deterrent,” he insisted....."
COMMENT
The line, "If they're not developing a nuclear deterrent, they are crazy," reminds me of the late comedian Danny Thomas. He once said, "I live in Beverly Hills, where if you don't have a psychiatrist, you are crazy!"
Posted by Tony at 3:00 AM