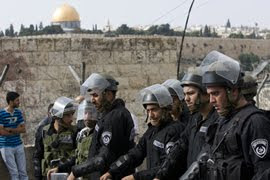 "Israel has ordered its military forces to impose a total closure on the West Bank in the occupied Palestinian territory for 48 hours.

The closure was enforced Thursday midnight amid reports on the possibility of fresh protests by Palestinians around the Al-Aqsa Mosque in Jerusalem (al-Quds) after Friday prayers. The closure is to be lifted on Saturday night.

According to witnesses, Israeli police forces are increasing presence in al-Quds due to concerns that riots may break out in the holy city and spill over into the West Bank.

During the closure, entrance to the mainly Arab eastern sector of al-Quds will only be open to some 1,000 church employees, 550 teachers, 50 Palestinian Waqf employees and some 100 employees of religious bodies. 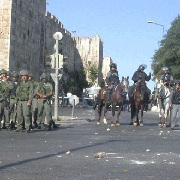 Riots broke out last week in al-Quds following Tel Aviv regime's decision to illegally add the Ibrahimi Mosque and the Mosque of Bilal bin Rabah to its list of Israeli heritage sites.

This week's tensions appear to focus on the new Israeli plan to build 1,600 new Jewish homes in the Ramat Shlomo neighborhood of the occupied West Bank it has annexed to al-Quds."
Posted by Tony at 3:10 AM