Why do Egyptians love Avatar? 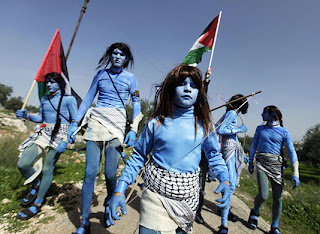 "......"Egyptians don't like to see reality on the big screen, this is why films such as Syriana and The Hurt Locker are not popular. Egyptians want an escape," said Mohsen Goma'a, an aspiring filmmaker. But their support for Avatar also misses the mark. They have escaped from reality only to enter a new imaginary world where a film speaks directly to their struggle. "Through Avatar I lived the story of the Palestinian, Iraqi, Afghan and Lebanese peoples and the wars waged against them; where the west treats these peoples as if they were the children of the Na'vi" wrote the blogger South Lebanon.

There are numerous short films on YouTube paralleling the stories of the Na'vi and the Palestinians. One Arabic blog argues that Avatar is delivering a message to Americans that is "optimistic and hopeful despite the current situation". What are Americans supposed to be optimistic about? That they are the holders of the world's destiny, much in the same manner that Jake Sully is with the Na'vi? Sully, not the Na'vi, is the hero of the film. He becomes their leader in order for the Na'vi to defend themselves from the vastly superior technology of his former brethren.

Egyptians want something to believe in and Avatar offers a vague picture that is being co-opted into something it isn't. These arguments that Pandora represents the modern Middle East are essentially people pulling an idea out of the sand in order to connect with a very entertaining film. One could see the struggle of the Palestinians and other occupied societies as akin to that of the Na'vi in Avatar, but why would we want to? If Palestinians are dressing in blue and going to the streets in protest to show how connected they are to the fictional people of Pandora, does it not also reveal a stark reality that they would deny: a foreign saviour is needed if they are to realise their goal of throwing off the yoke of Israeli occupation?"
Posted by Tony at 4:04 AM