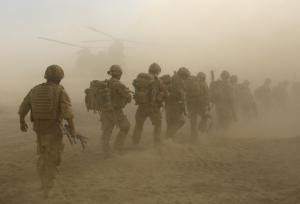 It's as phony as he is

"In a message to US troops in Afghanistan, Defense Secretary Robert Gates praised the soldiers who fought in the recent Marjah offensive, averring: "
“You all have had a very tough time. You came into an area totally controlled by the Taliban. You fought for a critical battle space, you bled for it and now you own it.”
Yes, we own it – but what is it, exactly, that we own?
Marjah, by all accounts appearing in the US media, is supposed to have been a city, or at least a major town. Described as containing some 80,000 inhabitants – and a bustling center of insurgent activity, a Taliban stronghold that had to be taken – Marjah was depicted as a rather large target, and our glorious "victory" was therefore portrayed as a major triumph. The only problem with this narrative is that it bears no relation to reality.
As Gareth Porter points out in a piece published on this site, Marjah, far from being a major city or even a town, is a minor hamlet consisting of one mosque and a few other buildings, mostly stores. There is no city of 80,000 souls, as Western "reporters" have been telling us, there are no "neighborhoods" as described in countless news dispatches from the "mainstream" media, and the imagery of house-to-house fighting imparted by these reports is a total fiction.......

Obama’s Potemkin village in Afghanistan may succeed in fooling some people for a limited period of time, but the flaw in the COIN strategy embraced by this administration is that it overlooks a key point. A self-serving and demonstrably false "mainstream" narrative invariably provokes a counter-narrative, one much closer to the truth. The War Party may be able to rely on the "mainstream" media to go along with the fraud for a good long time, but they would have to shut down the Internet to preemptively kill the counter-narrative and silence its adherents. Although, I hear, they’re working on that …."
Posted by Tony at 4:23 AM