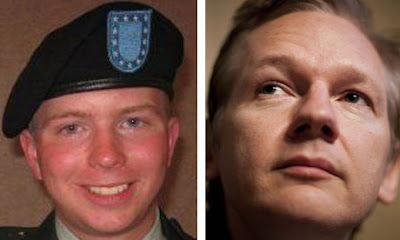 "Last year, around this time, I initiated what I called the Antiwar.com Awards – a year end tribute to the best, and the worst, people and institutions that impact our lives and the life of our nation and the world. And what good is a tradition unless one endeavors to keep it going? So here’s the 2010 edition, for your delectation:

Man of the Year – This is really Men of the Year, because it’s a joint award: Pfc. and political prisoner Bradley Manning and Julian Assange, founder of WikiLeaks and Public Enemy Number One of the Powers That Be. Much has been said and written about the pros and cons of Assange’s project to inject a little transparency into the opaque mysteries of how and why US foreign policy is formulated and carried out the way it is, and I won’t repeat much of that here.

Suffice to say that I fully subscribe to Assange’s theory of the state [.pdf] as a criminal conspiracy, and thoroughly approve of his strategy to bring the current gang to heel. What’s interesting, however, is how polarizing his persona has become, and how quickly it has been detached from his considerable accomplishments. The propaganda campaign against him – directed, no doubt [.pdf], from here – has been quite successful, and quite a show, bearing all the hallmarks of a distinctively American operation (it’s all about sex). And, again typically, it involves the eager “mainstream” media to a great extent – thank you Kevin Poulsen, John F. Burns, and all the Little People who made this award possible. By targeting Assange you have underscored his value to the world’s peoples, and reminded us what shills you are.......

Speaking of the King and his Court, the Interventionist of the Year award can only go to Barack Obama, who has managed to keep the United States involved in more major simultaneous military conflicts than any President in US history – and is actively seeking to break his own record. In spite of our much-vaunted “withdrawal,” we’re still in Iraq, and it doesn’t look like we’re leaving any time soon – which is why Prime Minister Maliki has lately reminded us of our self-imposed “deadline.” We’re hip-deep in Afghanistan, and will soon be in over our heads – but that hasn’t stopped this administration from wading into Pakistan proper, not to mention Yemen and Somalia, where we’re knee deep in vicious internecine conflicts that have little to do with a serious “terrorist” threat to America. Here is an ideological chameleon who managed to shut down the antiwar movement by adopting their colors and lulling much of the “progressive” antiwar left to sleep. And what he didn’t shut down by persuasion he’s intent on shutting down by means of legal persecution, as the arrests of antiwar activists in Minneapolis, Chicago, and North Carolina, and the grand jury investigation into their activities, makes all too clear. Remember, it was a “progressive” president named Woodrow Wilson who ruthlessly crushed dissent during the Great War, and it was the Wilson administration that originated the same Espionage Act Eric Holder’s Justice Department will use to prosecute Julian Assange, if they ever get their hands on him.

God willing, they will not, but I’m pessimistic. The US government cannot afford to let Assange stay free: his successful defiance is proof of their weakness, which – if WikiLeaks isn’t stopped – will prove fatal to their regime of secrecy and plunder. 2011 is the year this issue – the issue of a free media, and whether real dissent is going to be allowed – is going to be resolved, one way or the other. "
Posted by Tony at 3:56 AM