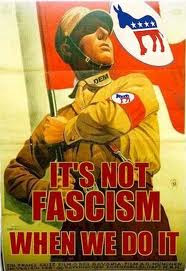 "The year 2011 will bring Americans a larger and more intrusive police state, more unemployment and home foreclosures, no economic recovery, more disregard by the U.S. government of U.S. law, international law, the Constitution, and truth, more suspicion and distrust from allies, more hostility from the rest of the world, and new heights of media sycophancy.

2011 is shaping up as the terminal year for American democracy. The Republican Party has degenerated into a party of Brownshirts, and voter frustrations with the worsening economic crisis and military occupations gone awry are likely to bring Republicans to power in 2012. With them would come their doctrines of executive primacy over Congress, the judiciary, law, and the Constitution and America’s rightful hegemony over the world.....

As 2011 dawns, public discourse in America has the country primed for a fascist dictatorship.The situation will be worse by 2012. The most uncomfortable truth that emerges from the WikiLeaks saga is that American public discourse consists of cries for revenge against those who tell us truths. The vicious mendacity of the U.S. government knows no restraint. Whether or not international law can save Julian Assange from the clutches of the Americans or death by a government black ops unit, both executive and legislative branches are working assiduously to establish the National Security State as the highest value and truth as its greatest enemy.

America’s future is the world of Winston Smith."
Posted by Tony at 4:20 AM