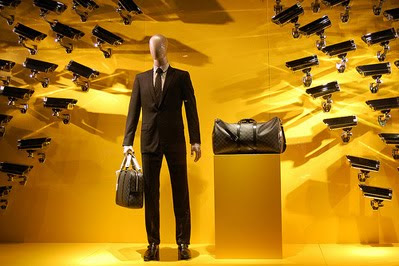 A GREAT PIECE
By Chris Hedges

"The two greatest visions of a future dystopia were George Orwell’s “1984” and Aldous Huxley’s “Brave New World.” The debate, between those who watched our descent towards corporate totalitarianism, was who was right. Would we be, as Orwell wrote, dominated by a repressive surveillance and security state that used crude and violent forms of control? Or would we be, as Huxley envisioned, entranced by entertainment and spectacle, captivated by technology and seduced by profligate consumption to embrace our own oppression? It turns out Orwell and Huxley were both right. Huxley saw the first stage of our enslavement. Orwell saw the second.

We have been gradually disempowered by a corporate state that, as Huxley foresaw, seduced and manipulated us through sensual gratification, cheap mass-produced goods, boundless credit, political theater and amusement. While we were entertained, the regulations that once kept predatory corporate power in check were dismantled, the laws that once protected us were rewritten and we were impoverished. Now that credit is drying up, good jobs for the working class are gone forever and mass-produced goods are unaffordable, we find ourselves transported from “Brave New World” to “1984.” The state, crippled by massive deficits, endless war and corporate malfeasance, is sliding toward bankruptcy. It is time for Big Brother to take over from Huxley’s feelies, the orgy-porgy and the centrifugal bumble-puppy. We are moving from a society where we are skillfully manipulated by lies and illusions to one where we are overtly controlled....

The noose is tightening. The era of amusement is being replaced by the era of repression. Tens of millions of citizens have had their e-mails and phone records turned over to the government. We are the most monitored and spied-on citizenry in human history. Many of us have our daily routine caught on dozens of security cameras. Our proclivities and habits are recorded on the Internet. Our profiles are electronically generated. Our bodies are patted down at airports and filmed by scanners. And public service announcements, car inspection stickers, and public transportation posters constantly urge us to report suspicious activity. The enemy is everywhere.

Those who do not comply with the dictates of the war on terror, a war which, as Orwell noted, is endless, are brutally silenced. The draconian security measures used to cripple protests at the G-20 gatherings in Pittsburgh and Toronto were wildly disproportionate for the level of street activity. But they sent a clear message—DO NOT TRY THIS. The FBI’s targeting of antiwar and Palestinian activists, which in late September saw agents raid homes in Minneapolis and Chicago, is a harbinger of what is to come for all who dare defy the state’s official Newspeak. The agents—our Thought Police—seized phones, computers, documents and other personal belongings. Subpoenas to appear before a grand jury have since been served on 26 people. The subpoenas cite federal law prohibiting “providing material support or resources to designated foreign terrorist organizations.” Terror, even for those who have nothing to do with terror, becomes the blunt instrument used by Big Brother to protect us from ourselves.

“Do you begin to see, then, what kind of world we are creating?” Orwell wrote. “It is the exact opposite of the stupid hedonistic Utopias that the old reformers imagined. A world of fear and treachery and torment, a world of trampling and being trampled upon, a world which will grow not less but more merciless as it refines itself.”"
Posted by Tony at 4:25 AM