Tunisia: The battle of Sidi Bouzid 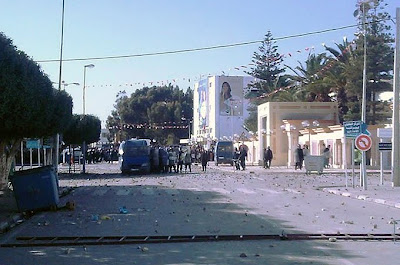 Poor economic policies have led to widespread distress as Tunisia's youth take their frustrations to the streets.

"What happened to the state? Where did civil society go? Why is there only silence from Development Minister Mohamed Nouri Jouini?

Before even attempting to answer each one of those questions, these seemingly dysfunctional institutions need to be inspected more closely in order to see the extent to which they share responsibility for the suicidal protests of despair by Tunisia’s youth.

This is a not time for scoring political points. What Wikileaks says or does not say about Tunisia’s ruling family serves no purpose here. This is a time for reflection on Tunisia’s own ‘wretched of the earth’ – the ‘khobz-istes’ of Sidi Bouzid and the country’s disenfranchised youth.

The Khobz-istes (the jobless) strike back

Putting Rousseau’s notion of a ‘social contract’ and Arab politics in the same phrase is to ask for an oxymoron. Tunisia’s politics is no exception. But there is another type of contract which has nothing to do with Rousseau: The ‘bread contract' - bread in parts of Tunisia and Egypt are called ‘eish, dear 'life' itself...."
Current Al-Jazeera (Arabic) Online Poll

Do you believe that the response of the Tunisian government is in line with the demands of the people of Sidi Bouzid?