Divided we stand: the tragedy of Egyptian opposition 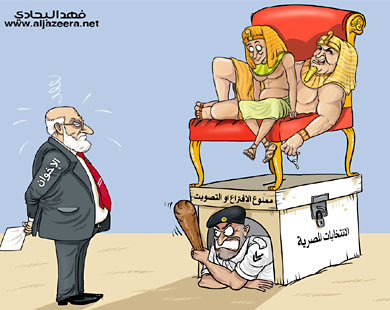 The institutional opposition has been unable to comprehend, let alone represent, industrial and agricultural workers' movements

"......Coming from and being largely limited to these social groups, the institutional opposition has been unable to comprehend, let alone represent, the two most relevant movements arising from lower social strata.

On one hand, the movement for workers' rights has gained significant concessions from the government since the first strikes in the textile sector in Mahalla al-Kubra in 2007, and has since gathered momentum and progressively extended its reach towards other manufacturing sectors. On the other hand, following the full implementation of Law 96 of 1992 – also known as "the law for throwing peasants out of their land" – that has to date led to the eviction of more than one million farmers, a peasant movement has emerged in the countryside, though it faces continued repression, as reported by Land Centre for Human Rights.

By its glaring inability to take these grievances seriously, the institutional opposition has condemned itself to continuing irrelevance in parliamentary life and has prevented a credible political articulation of the economic and social demands of both industrial and agricultural workers, ignoring that these movements could indeed constitute the much-needed popular support for a political opposition to the Mubarak regime......"
Posted by Tony at 4:45 AM