Happy New Year to You Too! Palestinian dies of Israeli tear gas 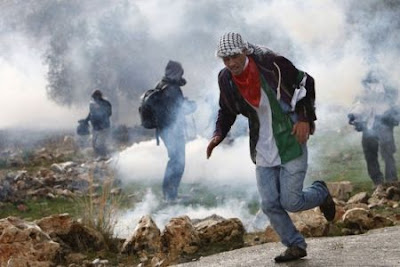 A Palestinian woman has died after inhaling tear gas fired by Israeli troops at demonstrators protesting the controversial Israeli separation wall in the occupied West Bank.

Medics added that Rachman, whose two brothers had also been killed during anti-barrier protests in the past, did not respond to treatment and died overnight.

At least 10 other people, among them international activists, were injured on Friday when Israeli troops fired tear gas to disperse anti-wall protesters in a village near Ramallah.

Barghouti asked the doctors to document "the crimes committed by Israel" and pursue international legal action......"
Posted by Tony at 5:23 AM