Surprise, Surprise! "Democracy" Can Be Fatal for Your Newborn: Research links rise in Falluja birth defects and cancers to US assault 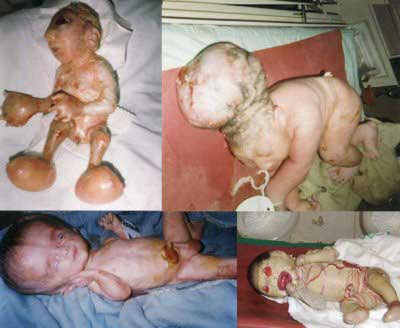 "A study examining the causes of a dramatic spike in birth defects in the Iraqi city of Falluja has for the first time concluded that genetic damage could have been caused by weaponry used in US assaults that took place six years ago.

The research, which will be published next week, confirms earlier estimates revealed by the Guardian of a major, unexplained rise in cancers and chronic neural-tube, cardiac and skeletal defects in newborns. The authors found that malformations are close to 11 times higher than normal rates, and rose to unprecedented levels in the first half of this year – a period that had not been surveyed in earlier reports.

The findings, which will be published in the International Journal of Environmental Research and Public Health, come prior to a much-anticipated World Health Organisation study of Falluja's genetic health......

No other city in Iraq has anywhere near the same levels of reported abnormalities. Falluja sees at least 11 times as many major defects in newborns than world averages, the research has shown.

The latest report, which will be published next week in the International Journal of Environmental Research and Public Health, says Falluja has been infected by a chronic environmental contaminant......"

The Children of Falluja
Posted by Tony at 4:53 AM

This is really interesting, You are a very skilled blogger.
I've joined your rss feed and look forward to seeking more of your great post. Also, I've shared your web
site in my social networks!