The Gaza massacre and the struggle for justice 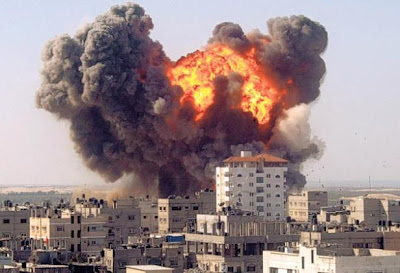 "The Gaza massacre, which Israel launched two years ago today, did not end on 18 January 2009, but continues. It was not only a massacre of human bodies, but of the truth and of justice. Only our actions can help bring it to an end.
The UN-commissioned Goldstone Report documented evidence of war crimes and crimes against humanity committed in an attack aimed at the very "foundations of civilian life in Gaza" -- schools, industrial infrastructure, water, sanitation, flour mills, mosques, universities, police stations, government ministries, agriculture and thousands of homes. Yet like so many other inquiries documenting Israeli crimes, the Goldstone Report sits gathering dust as the United States, the European Union, the Palestinian Authority and certain Arab governments colluded to ensure it would not translate into action.....

Thus the convoys and flotillas are an essential part of a larger effort to make Israel understand that it does have a problem and it can never be treated as a normal state until it ends its oppression and occupation of Palestinians in the West Bank and Gaza Strip, and fully respects the rights of Palestinian citizens of Israel and Palestinian refugees. And even if governments continue to stand by and do nothing, global civil society is showing the way with these efforts to break the siege, and with the broader Palestinian-led campaign of boycott, divestment and sanctions (BDS).
Amid all the suffering, Palestinians have not celebrated many victories in the two years since the Gaza massacre. But there are signs that things are moving in the right direction. Israel begs for US-endorsed "peace negotiations" precisely because it knows that while the "peace process" provides cover for its ongoing crimes, it will never be required to give up anything or grant any rights to Palestinians in such a "process."
Yet Israel is mobilizing all its resources to fight the global movement for justice, especially BDS, that has gained so much momentum since the Gaza massacre. There can be no greater confirmation that this movement brings justice within our grasp. Our memorial to all the victims must not be just an annual commemoration, but the work we do every day to make the ranks of this movement grow. "
Posted by Tony at 7:04 AM