An Open Letter from Gaza: Two Years After the Massacre, a Demand for Justice 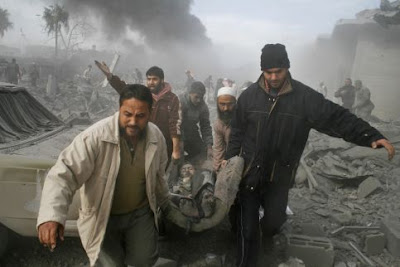 "We, the Palestinians of the Besieged Gaza Strip, on this day, two years on from Israel's genocidal attack on our families, our houses, our roads, our factories and our schools, are saying enough inaction, enough discussion, enough waiting -- the time is now to hold Israel to account for its ongoing crimes against us. On the 27th of December 2008, Israel began an indiscriminate bombardment of the Gaza Strip. The assault lasted 22 days, killing 1,417 Palestinians, 352 of them children, according to mainstream human rights organizations. For a staggering 528 hours, Israeli Occupation Forces let loose their US-supplied F15s, F16s, Merkava Tanks, internationally prohibited white phosphorous, and bombed and invaded the small Palestinian coastal enclave that is home to 1.5 million, of whom 800,000 are children and over 80 percent UN registered refugees. Around 5,300 remain permanently wounded......

We also call upon all Palestine solidarity groups and all international civil society organizations to demand:

- An end to the siege that has been imposed on the Palestinian people in the West Bank and Gaza Strip as a result of their exercise of democratic choice.
- The protection of civilian lives and property, as stipulated in International Humanitarian Law and International Human Rights Law such as The Fourth Geneva Convention.
- The immediate release of all political prisoners.
- That Palestinian refugees in the Gaza Strip be immediately provided with financial and material support to cope with the immense hardship that they are experiencing
- An end to occupation, Apartheid and other war crimes.
- Immediate reparations and compensation for all destruction carried out by the Israeli Occupation Forces in the Gaza Strip.

Boycott, Divest and Sanction. Join the many international trade unions, universities, supermarkets and artists and writers who refuse to entertain Apartheid Israel. Speak out for Palestine, for Gaza, and crucially ACT. The time is now.

List of signatories:
(37 major labor, youth, solidarity and relief organizations)
Posted by Tony at 9:26 AM