The rebirth of Arab activism 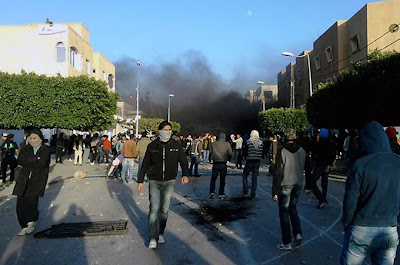 How one young Tunisian is emerging as a symbol of disenfranchised and impoverished Arab youth.

"Mohamed Bou'aziz, the young Tunisian who set fire to himself on December 17, is emerging as a symbol of the wider plight of the millions of young Arabs who are struggling to improve their living conditions....

A prelude to political liberalism?.....

Crying out against injustice

It was not until the global economic crisis that the Arab world started to witness the recovery of popular opposition - first materialising in Egypt in 2007 and 2008. These strikes and protests were the first indications of a return to organised protests against political repression and poverty inducing economic policies.

These movements, ultimately unsuccessfully, brought students and workers together to challenge the apathy and disdain of the ruling elite to the suffering of the poor and marginalised. The political movement for change, led by Mohamed ElBaradei, to establish a democratic and participatory political system, reflected the merger of the discontented sectors of Egyptian society.

But it was Bou'aziz's heart-wrenching attempt to kill himself that most accurately represented the loud cry of the millions of impoverished and aching citizens against the yoke of politically and economically repressive systems. His act was one of extreme despair. But he is not alone. Lahseen Naji, another young Tunisian, followed - electrocuting himself to death - and at least five others attempted to commit suicide but were stopped.

In Jordan and some other Arab countries, frustration borne out of political and economic disenfranchisement has manifested itself in a higher rate of societal violence, especially among the young. The absence of strong political parties and movements are strengthening tribal rivalries among younger generations, often leading to armed clashes.

But Jordanian society has also witnessed this frustration being turned into affirmative action in the form of workers' and teachers' demands for improved working conditions. Jordan's teachers have emerged as an important force within the country, resisting government attempts to marginalise them and pushing their demand for the formation of a syndicate to protect their interests.

As the Tunisian protests continued, demonstrations took place in Algeria against a housing programme that failed to accommodate the thousands of families made homeless by the country's devastating 2003 earthquake.

Bou'aziz's wounds and Naji's death should not go down in history as mere tragic incidents: if the Tunisian protests do indeed signal the return of social movements to the Arab world, their stifled hopes may just be turned into an outcry against injustice."
Posted by Tony at 11:11 AM