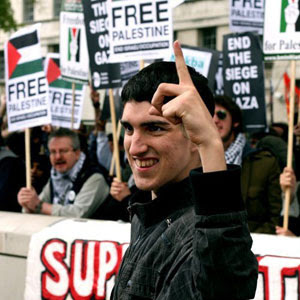 By Jody McIntyre
The Independent

"It feels strange to spend time over the Christmas period in a quiet Yorkshire village with family; this time last year, I was on my way to the Gaza Strip. It was the second time I had travelled to Gaza; the first time was in March 2009, just a few months after Israel had launched Operation Cast Lead, a twenty-two day assault on the Strip, in which 1,400 Palestinians and 13 Israelis were killed. Hard to describe as a conflict, a massacre perhaps, but a tragedy undoubtedly....

As the South African freedom fighter Steve Biko once said, “The most potent weapon of the oppressor is the mind of the oppressed.” The State of Israel can oppress the Palestinians for another sixty-three years, but it will never defeat their spirit, or win their minds."
Posted by Tony at 6:47 AM