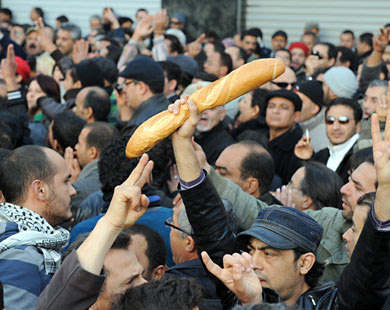 " There are few moments in the political atmosphere of the Middle East that fill me with genuine pride. While eyes have long been fixed on opposition movements in Iran and Egypt, suddenly Tunisia has provided one of the most inspiring episodes of indigenous revolt against a repressive regime.
Following the self-immolation of an unemployed man, riots and demonstrations have swept through the country.
Lebanese journalist Octavia Nasr wrote on Thursday: "I never thought this day would come. Certainly not in Tunisia. To be quite honest, out of the Middle East region, I thought such a rebellious act would come from Egypt where the opposition to President Mubarak's regime is so fierce and vocal that public demonstrations of anger and dismay have become a routine."
Despite distressing reports of security forces shooting demonstrators dead, the events are heartening, not necessarily as a harbinger of transformation in the region, but as an indication that it is possible. Change is sometimes more likely to happen when people know what it looks like, when the first person dares to points to the emperor and say that he is naked.......
Not that outpourings of passion are rare on Arab streets, but they are usually related to the latest events in Palestine, some random perceived insult from the west – or football. It's the rage of an easily slighted dignity, and it's rarely directed against the primary local culprit: the government itself......
Even if nothing comes of the Tunisian revolt, it is proof that the resignation is not an inevitability, that it is not hardwired into our DNA, that the "Arab malaise" is not terminal."
Posted by Tony at 7:33 AM