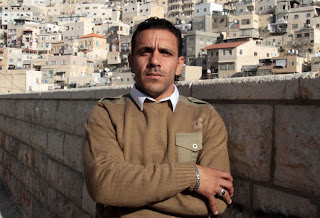 (Left: Adnan Gheith, who has been arrested by the Israeli military seven times in the past few months and who now faces banishment from his East Jerusalem home.)

"The Israeli military is making rare use of an emergency regulation enacted by the British Mandate in 1945 to order the temporary banishment of a Palestinian activist from his home city of Jerusalem.

Adnan Gheith, 35, faces expulsion for four months from the city because of his part in protests at mounting encroachment by Jewish settler groups in the politically ultra-sensitive Silwan neighbourhood of inner-city Arab East Jerusalem.

Silwan is the primary flashpoint in the struggle between the settlers and Palestinians for control of key sectors of East Jerusalem....

Ironically, the order invoked by the Israeli military was part of a package of emergency defence regulations codified by the British military at the end of the Second World War to combat growing Jewish unrest.

Daniel Seidemann, a prominent Israeli lawyer, said resort to the 1945 order smacked of "desperation" on the part of the authorities. He added that there was an attempt to "transform a Palestinian neighbourhood into an evangelical settlers' theme park, and the Palestinians are not playing the roles designated to them as extras in this pseudo-biblical pageant.""
Posted by Tony at 4:14 AM