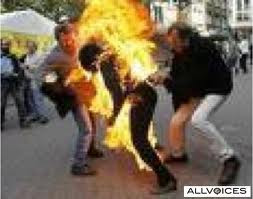 "CAIRO, Dec 31, 2010 (IPS) - As Western countries were busy celebrating Christmas and dealing with air traffic holiday delays because of snow blizzards, the tranquil North African country of Tunisia was going through events that would have been thought unthinkable just three weeks ago - public unrest that saw thousands demonstrate against the regime of President Zine el Abidine Ben Ali.

While the media and policy makers went heads over heals in the United States and Europe during similar protests against the disputed presidential elections in Iran in 2009, the unexpected events went largely ignored in the Western media. Tunisian bloggers and twitter posts are now the main source for minute by minute development of the unrest.....

Tunisia’s protests caught the region by surprise as the Ben Ali regime, like other rulers, had often trumpeted his country as an oasis of stability.

Trying to absorb the shock, Ben Ali announced a small cabinet reshuffle but left the interior ministry intact. He vowed a clampdown on the protestors."
Posted by Tony at 9:40 AM