Cuban medics in Haiti put the world to shame 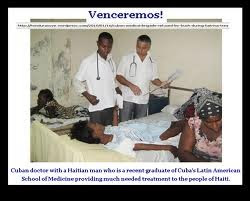 By Nina Lakhani
The Independent

"They are the real heroes of the Haitian earthquake disaster, the human catastrophe on America's doorstep which Barack Obama pledged a monumental US humanitarian mission to alleviate. Except these heroes are from America's arch-enemy Cuba, whose doctors and nurses have put US efforts to shame.

A medical brigade of 1,200 Cubans is operating all over earthquake-torn and cholera-infected Haiti, as part of Fidel Castro's international medical mission which has won the socialist state many friends, but little international recognition....."
Posted by Tony at 4:25 AM