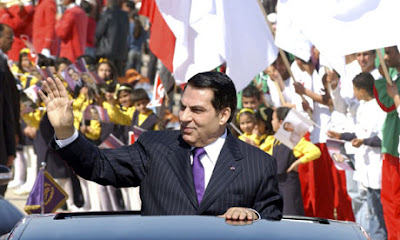 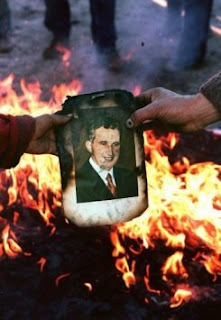 "Watching events in Tunisia over the past few days, I have been increasingly reminded of an event in 1989: the fall of the Romanian dictator, Nicolae Ceausescu. Is the Tunisian dictator, Zine El Abidine Ben Ali, about to meet a similar fate?
After 22 years in power, Ceausescu's end came suddenly and somewhat unexpectedly.......
Reporting of these events has been sparse, to say the least. The Tunisian press, of course, is strictly controlled and international news organisations have shown little interest: the "not many dead" syndrome, perhaps. But in the context of Tunisia they are momentous events. It's a police state, after all, where riots and demonstrations don't normally happen – and certainly not simultaneously in towns and cities up and down the country.
So, what we are seeing, firstly, is the failure of a system constructed by the regime over many years to prevent people from organising, communicating and agitating.
Secondly, we are seeing relatively large numbers of people casting off their fear of the regime. Despite the very real risk of arrest and torture, they are refusing to be intimidated.
Finally, we are seeing the breakdown of a long-standing devil's compact where, in return for submitting to life under a dictatorship, people's economic and welfare needs are supposedly taken care of by the state.....
Most Arab regimes rely on patronage networks to keep themselves in power but Ben Ali's support base looks comparatively small and increasingly fragile, as the US ambassador noted last year in one of the WikiLeaks documents. He described a regime that has lost touch with the people, a regime that tolerates no advice or criticism and whose corruption has become so blatant that "even average Tunisians are now keenly aware of it".
Ben Ali may try to cling on, but his regime now has a fin de siècle air about it. He came to power in 1987 by declaring President Bourguiba unfit for office. It's probably just a matter of time before someone else delivers that same message to Ben Ali."
Posted by Tony at 3:25 PM