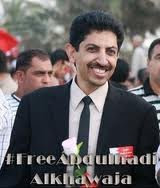 Concerns About Ill-Treatment in Military Court Hearings for 14

The activist, Abdulhadi al-Khawaja, was one of 14 defendants, most active with opposition political movements, charged with attempting to "topple the regime forcibly in collaboration with a terrorist organization working for a foreign country." His wife and daughter spoke with him briefly after the court session, the first time they had been allowed to see him since he was arrested and badly beaten on April 9. They observed multiple facial injuries, and he told them he had four fractures on the left side of his face, including one in his jaw that had required four hours of corrective surgery.

"It appears that Abdulhadi al-Khawaja's jailers tortured him during the month they held him in incommunicado detention," said Joe Stork, deputy Middle East director at Human Rights Watch. "Torture or ill-treatment is a serious crime, and Bahraini officials who did or authorized this treatment need to be held accountable."

Human Rights Watch has documented the routine use of torture by Bahraini security officials during similar interrogations in political and security-related cases....."
Posted by Tony at 7:03 AM