Yemen must halt use of deadly force ahead of planned protest 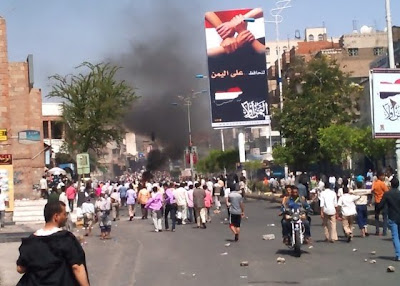 "Amnesty International has called on the Yemeni authorities to stop using unnecessary deadly force against anti-government protesters, after security forces today opened fire on demonstrations in the capital Sana'a and the city of Ta’izz killing at least two people.

The call came ahead of planned marches on the presidential palace from the protest camp near Sana’a University.

According to Amnesty International’s latest figures, over 145 people have been killed in Yemen during months of demonstrations calling for an end to the 32-year rule of President Ali Abdullah Saleh....."
Posted by Tony at 8:11 AM