The Massacres Erdogan Warned About Are Unfolding: Syrian tanks 'shell district of Homs' 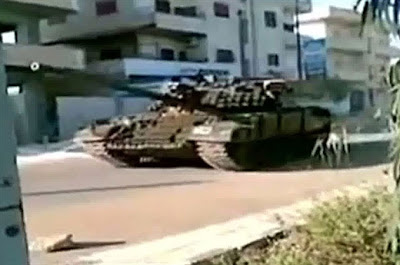 Neighbourhood in restive city "shaking" with explosions from shelling and gunfire, according to rights campaigner.

"Army tanks have shelled a residential district in Homs, according to a rights campaigner in the Syrian city which has emerged as the most populous centre of defiance against Bashar al-Assad's rule.

"Homs is shaking with the sound of explosions from tank shelling and heavy machine guns in the Bab Amro neighbourhood," Najati Tayara, said....

Ban Ki-moon, the UN secretatry general, urged Syria on Wednesday to halt mass arrests of anti-government protesters and to heed calls for reform.

Ban also said that UN humanitarian workers and human rights monitors must be allowed into Deraa, as well as other cities so as to assess the situation and needs of the civilian population.

"I urge president Assad to heed the call of the people for reform and freedom and desist from the mass arrest of peaceful demonstrators, and to cooperate with the human rights monitors," Ban told a news conference in Geneva.

"I am disappointed that the United Nations has not been granted access yet to Deraa and other places," he added.

Speaking to the New York Times, a powerful cousin of the president said the Assad family was not going to capitulate.

"We will sit here. We call it a fight until the end...They should know when we suffer, we will not suffer alone," Rami Makhlouf told the newspaper.

Makhlouf, a tycoon in his early 40s who owns several monopolies, and his brother, a secret police chief, have been under specific US sanctions since 2007 for corruption.

Suhair al-Atassi, a rights campaigner, said a demonstration broke out on Tuesday in Homs, despite a heavy security presence, after tanks stormed several neighbourhoods on Sunday and three civilians were killed.

"This regime is playing a losing card by sending tanks into cities and besieging them. Syrians have seen the blood of their compatriots spilt. They will never return to being non-persons," she told Reuters.

Demonstrators have shouted the name of Makhlouf as a symbol of graft....

Demonstrators in Baniyas had raised posters of Recep Tayyip Erdogan, the Turkish prime minister, who has had close ties to Assad, but has disputed the official Syrian account of the violence.