Want a Huge Laugh? Gaddafi "wants to be like the Japanese emperor, or Castro....and lead a dignified life" 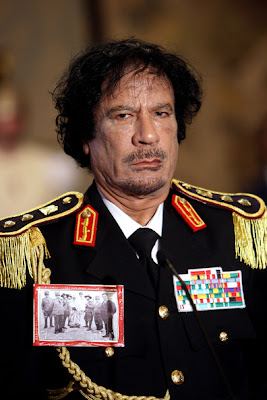 Does He Look Dignified to You?

"....Interviews with four regime members have confirmed that Gaddafi knows his time is up. "But he isn't going to run away to Venezuela," one official said. "He wants to move to the background and lead a dignified life. He himself has said he wants to be like the Japanese emperor, or Castro."

"He knows and we know that Libya doesn't have a future through imposing his cult of personality on the people and the world," said a second official. "There is no question that the country needs reforms, many reforms."....."
Posted by Tony at 4:47 PM