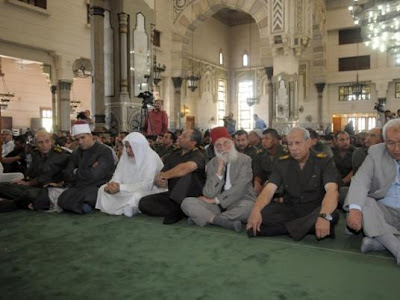 "In recent decades, the term "Salafi" has been used to label groups that advocate a literal reading of Islam and seek to revive the lifestyle of the Salafor early Muslims. In Egypt, Salafism is more a school of thought, rather than an organization with a hierarchy. The roots of the school can be found in Saudi Wahhabism, which first emerged in the 18th century in the Arabian Peninsula. Since the 1970s, Saudi Arabia has been spreading such fundamentalist ideas in Egypt by exporting radical books and financing certain Salafi activities. Egyptians working in the Gulf and then returning to Egypt have also helped to spread such views. Under Mubarak, Salafis generally kept a low profile and remained out of politics, although they were used by the former regime to counter the Muslim Brotherhood. During the 25 January revolution, Salafi scholars denounced protests as un-Islamic and warned Muslim youths against engaging in the uprising, but the hard-line Muslims became visible once Mubarak and his security apparatus fell. They were emboldened to stage more protests along sectarian lines. Some went further, announcing the formation of political parties to compete in the parliamentary elections slated for September. Some observers allege that the sudden emergence of Salafis is orchestrated by Saudi Arabia, which seeks to abort the Egyptian revolution for fear that the same revolutionary model would be reproduced on its soil. Younis expects that after the Imbaba incident, the army will deal a blow to such radical groups. However, he voiced fears that giving the military a free hand in uprooting Salafis might threaten the prospects for a transition to civil democratic rule..."
Posted by Tony at 8:59 AM