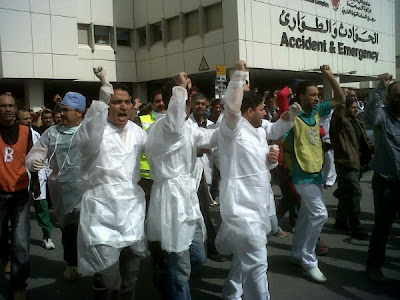 "Harrowing testimony of torture, intimidation and humiliation from a doctor arrested in the crackdown on medical staff in Bahrain has revealed the lengths to which the regime's security forces are prepared to go to quash pro-democracy protests.

Interviews obtained by The Independent from inside Bahrain tell of ransacked hospitals and of terrified medical staff beaten, interrogated and forced into signing false confessions. Many have been detained, their fate unknown.

Inspired by the pro-democracy protests which swept Tunisia and Egypt earlier this year, Bahrainis took to the streets in their thousands in February, demanding greater political rights and more equality for the Shia Muslim majority, ruled over for decades by a Sunni monarchy.

The state launched a fierce counter-offensive in mid-March, swiftly and brutally crushing the uprising with the backing of Saudi security forces.

The campaign of intimidation against the doctors and nurses who bore witness to the bloody crackdown began two months ago at Salmaniya Medical Complex, the main hospital in the capital Manama. It has since been extended to at least nine health centres which have been systematically attacked by the security forces over the past month, an activist cataloguing the abuses says...."
Posted by Tony at 5:50 PM