Bahrain is trying to drown the protests in Shia blood 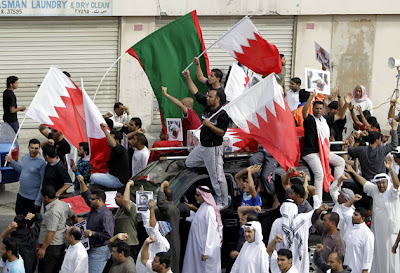 World View: Claiming that the opposition is being orchestrated by Iran, the al-Khalifa regime has unleashed a vicious sectarian clampdown

""Let us drown the revolution in Jewish blood" was the slogan of the tsars when they orchestrated pogroms against Jews across Russia in the years before the First World War. The battle-cry of the al-Khalifa monarchy in Bahrain ever since they started to crush the pro-democracy protests in the island kingdom two months ago might well be "to drown the revolution in Shia blood". Just as the tsars once used Cossacks to kill and torture Jews and burn their synagogues, so Bahrain's minority Sunni regime sends out its black-masked security forces night after night to terrorise the majority Shia population for demanding equal political and civil rights.......

The al-Khalifas are aware that their strongest card in trying to discredit the opposition is to claim it has Iranian links. US embassy cables revealed by Wikileaks show that the Bahrain government was continually making this claim to a sceptical US embassy over the years, but has never provided any evidence. This propaganda claiming Iranian plots is crude, but plays successfully in Sunni Gulf states that see an Iranian hand behind every Shia demand for equal rights and an end to discrimination. It also gets an audience in Washington, conscious that its Fifth Fleet is based in Bahrain and fearful of anything that could strengthen Iran.

The Bahraini monarchy, having effectively declared war on the majority of its own people, is likely to win in the short term because its opponents are not armed. The cost will be that Bahrain, once deemed more liberal than its neighbours, is turning into the Gulf's version of Belfast or Beirut when they were convulsed by sectarian hatred."
Posted by Tony at 8:27 PM