Bahrain topples its own people 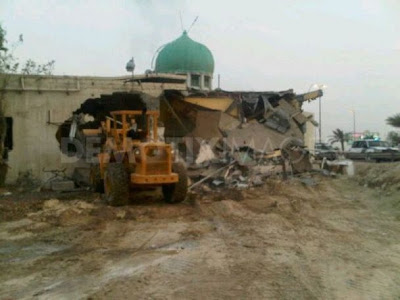 "March 14, 2011, will go down in history as the infamous day when the House of Saud launched - with full United States backing - a vicious counter-revolution designed to smash the Gulf chapter of the great 2011 Arab revolt. (See Exposed: The US/Saudi Libya deal Asia Times Online, April 2, 2011).

This is the day Saudi troops - with a token few from the United Arab Emirates (UAE) - invaded Bahrain, theoretically at the request of the ruling Sunni al-Khalifa dynasty, to "help" in the crackdown on nationwide pro-democracy protests.....

Then there's the new House of Saud/al-Khalifa sport of "smash the mosque". At least 27 mosques and scores of religious buildings have been destroyed - including the 400-year-old Amir Mohammed Braighi mosque. Minister of Justice and Islamic Affairs Sheikh Khalid bin Ali bin Abdulla al-Khalifa, has claimed, "These are not mosques. These are illegal buildings."

That's the al-Khalifa icing on the cake after they virtually destroyed the Bahraini health care system (run essentially by Shi'ites); fired over a thousand Shi'ite civil servants and canceled their pensions; jailed scores of students and teachers who took part in the protests; beat and arrested journalists; and closed down the only opposition newspaper.

As part of the US/Saudi deal, Bahrain - and by extension the House of Saud - can get away with anything; all praise for the al-Khalifas for hosting the US Navy's Fifth Fleet. No UN sanctions or even a slap on the wrist; no no-fly or no-drive zone approved by a UN resolution; no arming of the "rebels"; no North Atlantic Treaty Organization bombing; no burning desire for regime change as in Libya; no Tomahawk diplomacy; and of course no target assassinations.

For the moment at least, sizable Anglo-American investments in Bahrain are "protected"; as for the British merchants of death who sell hand grenades, demolition charges, smoke canisters and thunder flashes to the al-Khalifa repression machine, business can only prosper. "
Posted by Tony at 6:51 AM