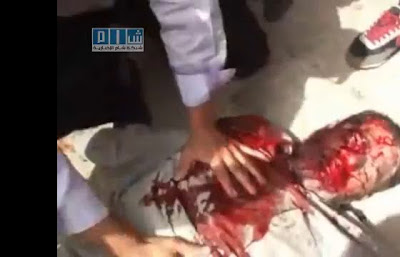 Syrians demanding political freedom and an end to corruption have held weeks of what they say are peaceful demonstrations in the face of government repression, despite a civilian death toll that has reached 800, according to the Syrian human rights organisation Sawasiah.

On Sunday, residents in Homs said they heard machine-gun fire and shelling as troops made their first incursion into residential areas of the city of 1 million people, 100 miles north of Damascus.

At least one person, a 12-year-old child, was killed when tanks and troops went into the Bab Sebaa, Bab Amro and Tal al-Sour districts of Homs during the night, according to the Syrian Observatory for Human Rights.

"The areas have been under total siege since yesterday," the organisation said. "There is a total blackout on the numbers of dead and injured. Telecommunications and electricity are repeatedly being cut in those districts."

Elsewhere, a witness said security forces killed at least two unarmed demonstrators when they fired on a night rally in the eastern city of Deir al-Zor....

This video shows the protest in Deir al-Zor before it was attacked: