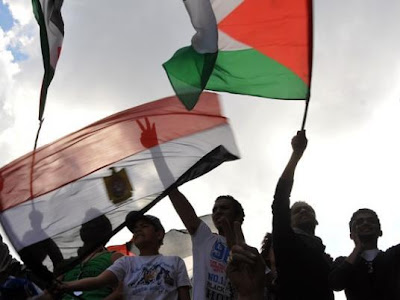 "CAIRO, May 10, 2011 (IPS) - Following the February ouster of Egypt’s longstanding President Hosni Mubarak, calls have been circulating in Egypt and throughout the region for a ‘Third Intifadah’ to begin May 15.

It began with the appearance of a Facebook.com page in early March calling for a ‘Third Intifadah’ against the ongoing Israeli occupation of Palestinian land. The page, reportedly founded by Arab pro- Palestinian groups, set the launch date for May 15 - the day on which hundreds of thousands of Palestinians were driven from their homes in 1948 to make way for the nascent state of Israel....

In the three months since Mubarak’s departure, Egypt has witnessed a spate of marches and protests in front of both Israel’s embassy in Cairo and its consulate in Alexandria, where demonstrators could be seen distributing flyers about the planned event.

The ‘Third Intifadah’ had initially included plans for a protest march to Egypt’s Rafah border crossing with the Gaza Strip, which has been sealed for the most part since 2007. This plan was abandoned, however, following a promise by Egypt’s SCAF-appointed foreign minister late last month that the crossing would soon be reopened on a permanent basis.

Nevertheless, the Arab Doctors Union plans to dispatch a convoy of Gaza-bound humanitarian aid through the Rafah crossing - scheduled to set out from Tahrir Square on May 15.....

Notably, Palestinian faction Hamas, which governs the strip and espouses a policy of armed resistance to Israel, has not publicly endorsed calls for a ‘Third Intifadah’. Palestinian Authority President Mahmoud Abbas, meanwhile, who heads rival Palestinian faction Fatah and supports a discredited ‘peace process’ with Israel, has voiced downright opposition to the idea....[The Two Are Now Partners in Crime!]

"If the Palestinians stage peaceful protests en masse and persevere despite Israel’s inevitably violent response - and are supported by simultaneous demonstrations in Arab and western capitals - the Israeli occupation’s days may very well be numbered," said Kandil...."
Posted by Tony at 7:12 AM