Bin Laden out, Gaddafi next 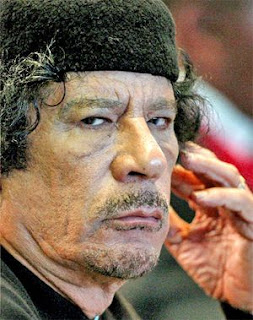 "....As for why Gaddafi gets the boot while the al-Khalifas in Bahrain, Saleh in Yemen and Bashar al-Assad in Syria get away with it - that's simple; you're not an evil dictator if you're one of "our" bastards - that is, play by "our" rules. The destiny of "independents" such as Gaddafi is to become toast. It helps if you already have a key US military base in your country - as with the al-Khalifas and the US 5th Fleet.

If the al-Khalifas were not US lackeys and there was no US military base, Washington would have no problems selling an intervention in favor of the peaceful, largely Shi'ite pro-democracy protesters against a ghastly Sunni tyranny which needs the House of Saud to repress its own people.

Then there are the legalese aspects. Imagine putting Gaddafi on trial. Martial court or civil court? A kangaroo court - a la Saddam Hussein – or offering him all the "civilized" means to defend himself? And how to prosecute crimes against humanity beyond reasonable doubt? How to use testimonies obtained under torture, sorry, "enhanced interrogation"? And for how long? Years? How many witnesses? Thousands?