Sweeping arrests in Syria as tanks roll in 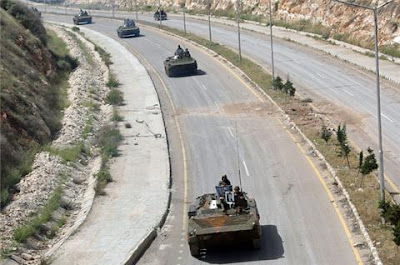 Rami Abdul-Rahman, the director of the Syrian Observatory for Human Rights, said more than 200 people were picked up overnight in Banias, a key oil-industry city on the Mediterranean coast where some of the largest protests have been held. On Saturday, troops in tanks and armored vehicles rolled in and sealed off the city.

A 10-year-old was among those taken into custody, Abdul-Rahman said.

"It appears to be designed to punish his parents [An Israeli tactic!]," he told The Associated Press, adding that water, electricity and nearly all forms of communication to the city have been cut.

Another activist getting witness reports said three more people have been reported dead there since Saturday, bringing the two-day death toll in Banias to six. The activist declined to be named for safety reasons...."
Posted by Tony at 4:00 AM