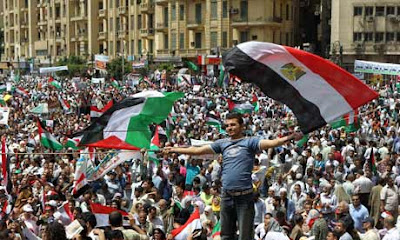 "Tens of thousands of Egyptians returned to Tahrir Square in Cairo on Friday in a show of national unity against sectarian tension, and to demonstrate their solidarity with the Palestinian people.

The largest rally to be held in the Egyptian capital in recent weeks took place as Suzanne Mubarak, wife of ousted president Hosni Mubarak, was detained by investigators for 15 days on suspicion of illegally acquiring wealth....

In a sign of how vibrant and fragmented Egypt's political landscape has become since the toppling of Mubarak in February, protesters came together on Friday to support a multitude of causes from local anti-corruption campaigns to unity with Arab uprisings elsewhere in the region.

Following a week of sectarian violence in Cairo in which at least 15 people were killed in clashes at a church in the poor neighbourhood of Imbaba, many demonstrators held aloft placards depicting the Christian cross and Muslim crescent, and chanted: "We are all Egyptians."...."
Posted by Tony at 1:10 PM