Opening a Border, Ending an Era 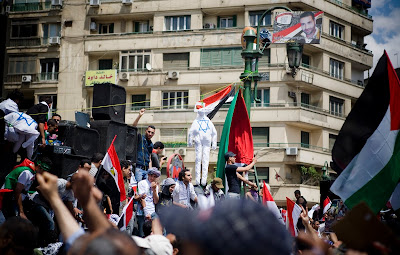 (Click on photo, courtesy of Hossam El-Hamalawy, to enlarge)

"CAIRO, May 14, 2011 (IPS) - In a dramatic policy shift late last month, Egypt's post-revolutionary government announced plans to reopen the Rafah border crossing with the Gaza Strip. And on Friday, hundreds of thousands of Egyptians amassed in Cairo's Tahrir Square to demand the decision be carried out without delay.

"Egypt's sovereign decision to reopen the border represents a new chapter in Egyptian policy vis-à-vis Palestine, which is finally coming into line with the popular will," Tarek Fahmi, political science professor at Cairo University, told IPS....

On Friday (May 13), hundreds of thousands of Egyptian protesters swarmed Cairo's Tahir Square to condemn Israel's continued mistreatment of the Palestinians and the unabated theft of Palestinian land. Along with calling for national unity following a recent spate of sectarian unrest, demonstrators demanded the immediate reopening of the border, the return of Palestinian refugees to their homes in historical Palestine, and the expulsion of Israel's ambassador to Egypt.

Many protesters also called for the abrogation of Egypt's 1979 Camp David peace treaty with Israel. "The Egyptian people are overwhelmingly opposed to the terms of Camp David," 28-year-old demonstrator Ahmed Sherara told IPS while collecting signatures in support of the treaty's annulment.....

Egyptian activists had initially called on protesters to move en masse across the Sinai Peninsula towards the Rafah crossing. On Thursday, however, head of Hamas's political bureau Khaled Meshaal issued a statement saying that such a move was unnecessary.

"We do not ask you to march (to Rafah). Egyptians of various factions and sectors must first unite to establish a strong internal front," said Meshaal. "We cannot call on Egypt to engage in a direct clash or war with the Zionist entity at the critical stage through which Egypt is now passing."

Nevertheless, the Egyptian authorities don't appear to be taking any chances, with Al Jazeera reporting that security forces had declared a "state of alert" at all entry points into Sinai.

"No one is being allowed to enter the peninsula without express authorisation from the authorities," a North Sinai security source, preferring anonymity, told IPS."
Posted by Tony at 8:40 AM