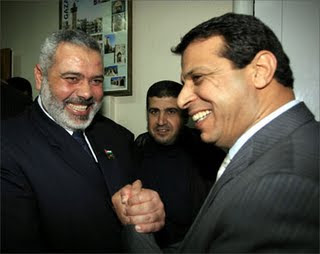 "RAMALLAH - Despite the euphoria surrounding the recent signing in Cairo of the groundbreaking unity accord between Palestinian rivals Fatah and Hamas, ending their four-year feud, numerous obstacles remain which could impinge on the implementation of a unity government.....

Hamas also showed pragmatism in meeting the PA and the international community’s demands in several other ways. The organisation stated that it would only continue armed resistance against the Israeli occupation in coordination with the PA [which means no resistance.] and would respect PA foreign policy in regard to previous agreements signed [which means implicitly accepting the Quartet conditions and the recognition of Israel.]with the international community.

Furthermore, Hamas said it wanted a Palestinian state established along the 1967 borders, as does the PA - in accordance with international law. Some Hamas leaders have stated in the past that a political accommodation with Israel based on recognition of its existence as a defacto reality on the ground was possible even if they questioned its justness.

IPS interviewed Ahmed Youssef, an advisor to Gaza-based Hamas defacto Prime Minister Ismail Haniyeh, on whether Hamas would ever recognise Israel. "We would be prepared to implement a Tadhiya [long-term truce] for 40 years and then leave it to the next generation to decide the next steps,[More weasel words from Hamas about recognizing Israel.]" Youssef told IPS....."
Posted by Tony at 7:27 AM