Bahrain's hospitals are used as bait 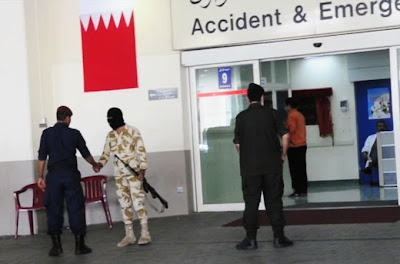 In a health system that is being dragged deeper into the political crackdown, patients risk imprisonment just for seeking care

"In Bahrain, to be wounded by security forces has become a reason for arrest and providing healthcare has become grounds for a jail sentence. During the current civil unrest, Bahraini health facilities have consistently been used as a tool in the military crackdown against protesters.

The muted response from key allies outside of the region such as the United States – which has significant ties to Bahrain, including a vast naval base in the country – can only be interpreted as acceptance of the ongoing military assault, which is backed by the Gulf Co-operation Council.

While the government and its supporters in Bahrain continue to refer to the protesters as rioters, criminals, extremists, insurgents or terrorists, the label that remains conspicuously absent for those who are wounded is "patient"....."
Posted by Tony at 1:29 PM