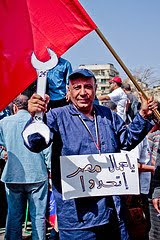 The long-term effects of revolution highlight influences from Lenin to Serbian activism amid a new globalist approach.

NOTE:
This is the full version of the excellent analysis by Mark Levine which I posted yesterday.

"....
Women and freedom
...
More broadly, many young and seemingly secular women are angry, not merely at their marginalisation in the emerging political system, but at the even greater harassment they are suffering at the hands - sometimes literally - of their conservative countrymen....

Claiming undue credit
...
Not surprisingly, more hardcore left and religious activists dismiss such claims of a substantial US role as baseless. "It's the most ludicrous claim I've ever heard," exclaimed prominent blogger and labour activist Hossam El Hamalawy, as we stood in the midst of an increasingly agitated anti-Assad protest at the Syrian embassy in Dokki. A constant presence at Tahrir who has spent years organising Egyptian workers, El Hamalawy was equally dismissive of the notion that the uprising was essentially non-violent, a la Gene Sharp's work.

"When the police attacked us we fought back, with rocks and molotov cocktails. Protesters burned down the NDP headquarters and police stations and in the case of northern Sinai, even blew up State Security facilities using RPGs. This is not a non-violent revolution."

He certainly has a point. A certain type of violence played a pivotal role early on in establishing the control of protesters over Tahrir, scaring off the police, and letting the army know that people were ready to fight to the death to take down Mubarak. But it's also true that the overall strategy was one of mass protest and strike actions to break down the regime, not armed rebellion.

Indeed, as we discussed this issue a squad of Egyptian riot police in full body armour showed up, ready to pounce on the increasingly rowdy demonstrators, who were shaking the gates of the Syrian embassy and beginning to throw things over the wall.

But then something fascinating happened. Organisers began shouting "Silmiyya, Silmiyya!" ["Peaceful"], a chant I first heard in Tahrir, and the local police officer trying to control the protest literally ran up to the riot police and implored them to back off, which they did, after which the protest continued without escalating. As several people commented to me, it's hard to imagine this scene, or the success of the uprising more broadly, had non-violence not been a primary strategic and moral choice of the protesters.

What is clear is that the larger claim of US influence is clearly much exaggerated.....

Bassem Fathy, now with the Egyptian Democracy Institute, is still angry at how the New York Times imposed this narrative over his words, which created a lot of anger among other activists. "Look, how can I say that Gene Sharp, or meeting Optur activists didn't affect us at least somewhat? I read a lot, searching for a 'magic stick' that would help us succeed. And we've received support from the NED and NDI.

"But we didn't need Americans to teach us how to use Facebook, and they're not responsible for the revolution. It's too big to be owned by anyone, especially an outside force. It was the ordinary people who came out en masse on January 25 through 27 who are the heroes."

In previous articles, I have written about the influence of Lenin on the thinking and strategies of the organisers. Continued discussions with Revolutionary Socialist activists who played a crucial role organising Tahrir and now in the workers movement confirm this assessment. Certainly Lenin outdid the CIA in influencing young activists before, during, and since the uprising. The clarity of vision and organisational strategy provided by the Leninist model is one reason why, according to El Hamalawy, "the only social movement right now that is continuing the struggle is the labour movement [and not the Brotherhood]... There are strikes daily and they are over bread and butter and political issues".

"Lenin's 'What is to be Done' and 'April Notes' helped shape our strategy, as did Marx's theories," Ahmed Ezzat explained. Organising revolutionary committees, uniting labour leaders from various sectors of the economy, creating independent trade unions and launching strikes - despite regime violence against them, were all and remain among the most powerful tools in the ongoing struggle against the still military-dominated economic and political system.

Even the more mainstream wing of the democratic resistance, led by people like Google executive Wael Ghonem, understood intuitively that without the poor and working class, the pro-democracy movement would never succeed. And so they organised "test runs" of the protest tactics and slogans that would define Tahrir in the period leading up to January 25, and took the enthusiastic response to slogans focusing on economic issues by people in popular quarters as proof that the protests would have legs, once launched...... "
Posted by Tony at 4:16 AM