The role Copts should play in post-Mubarak Egypt 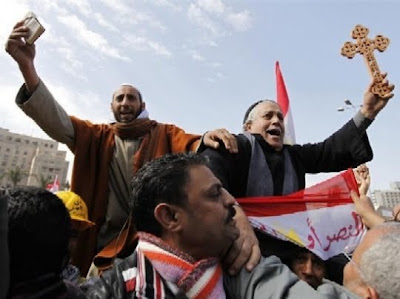 After decades of being marginalisation, the way forward is for Christian Copts to participate vigorously in Egypt's political life

"Coptic Christians have an exceedingly important role to play in post-Mubarak Egypt. Having been marginalised and frequently forced into submission for decades by a repressive regime, they are now called upon to engage actively and fully in forging the new political system that is slowly emerging out of the rubble of autocracy.

Sectarian tensions between Muslims and Copts have surfaced with unnerving regularity throughout the past decade. Evidence now strongly suggests that many of these incidents were the work of Hosni Mubarak's own security apparatus, to keep the country on the edge of disaster and in a perpetual state of fear and suspicion. The Coptic population were led to believe that without the protection of the regime they were at the mercy of a predatory population bent on destroying them.

The falseness of this claim was demonstrated by the fact that throughout the 18 days of protests that swept the country until the ousting of Mubarak, and despite the total absence of the police on the streets, there were no reported attacks against any churches or Coptic property....

The way forward is for Egyptian Copts to participate vigorously in political life. They should do that not as a religious group seeking to solve limited Coptic problems but as Egyptian citizens calling for equality and freedom for all. They must remember that many great Coptic personalities in the first half of the 20th century helped shape Egypt's outlook and contributed to the political and cultural life of the country by engaging in mainstream politics. They can follow in their footsteps by joining political parties, including even the newly established Freedom and Justice party of the Muslim Brotherhood.

Their active participation, along with secularists, liberals and women, will be the most powerful safeguard against any deviation or extremism. Remaining on the sidelines is no longer a feasible or an advisable option for Egypt's Christians."
Posted by Tony at 7:53 AM