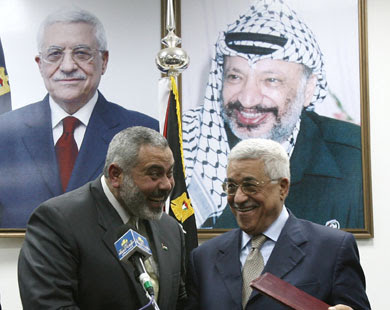 Hamas and Fatah's agreement will only maintain the status quo of division, called 'unity' only for public consumption.

"By deciding to join the US-backed Palestinian Authority led by Mahmoud Abbas, Hamas risks turning its back on its role as a resistance movement, without gaining any additional leverage that could help Palestinians free themselves from Israeli occupation and colonial rule.

Indeed, knowingly or not, Hamas may be embarking down the same well-trodden path as Abbas' Fatah faction: committing itself to joining a US-controlled "peace process", over which Palestinians have no say - and have no prospect of emerging with their rights intact. In exchange, Hamas may hope to earn a role alongside Abbas in ruling over the fraction of the Palestinians living under permanent Israeli occupation in the West Bank and Gaza Strip.

Whether Hamas realises it or not, it has effectively entered into a coalition with Israel and Abbas to manage the Occupied Territories, in which Hamas will have much responsibility, but little power.....

The Palestine Papers, revealed by Al Jazeera in January, document how deeply this collaboration went, including PA officials urging Israel to tighten the siege of Gaza, efforts by the PA to block Israeli releases of Palestinian prisoners, and secret committees to undermine the previous Palestinian national unity government established in 2007. Top PA official Saeb Erekat notoriously boasted to a US counterpart that "we even killed our own people" in the course of such "security" work for Israel.

Had Abbas apologised for, renounced and foresworn such activities as part of the reconciliation, then it might be understandable that Hamas would sign the deal. But nothing was mentioned about ending PA-Israeli collaboration - and there is every sign that the PA will continue with it. Indeed it has no option but to do so or risk losing the US and European financial support that props it up.....

Hamas has long signalled its desire to move away from armed struggle toward purely political means - this is the essence of its proposed hudna, or long-term truce, with Israel. It is of course possible to defend the legitimate and universal right to armed resistance against occupation, while choosing not to exercise it. "Where there is occupation and settlement, there is a right to resistance. Israel is the aggressor," Meshaal told The New York Times on May 5, "But resistance is a means, not an end."

Yet to choose different means, a movement has to have a viable political strategy and a clear definition of its ends. Hamas has failed to articulate, or to rally the Palestinian people around either. Instead its strategy appears to be simply to sign on to the inherently unjust, and infeasible "two-state solution" - and hope for admission to "the peace process".....

What the Hamas-Fatah "reconciliation" deal painfully demonstrates, contrary to the hopes of most Palestinians, is that neither Fatah nor Hamas has any idea how to get Palestinians out of their impasse. Both seem concerned merely with sharing the spoils of the Palestinian Authority and managing between them the wreckage of the failed Oslo accords.

Whatever Hamas and Fatah leaders do, the worst mistake the rest of the Palestinians could make is to leave the fate of their national movement in such hands....."
Posted by Tony at 3:56 AM