Egypt is still ruled by an iron fist 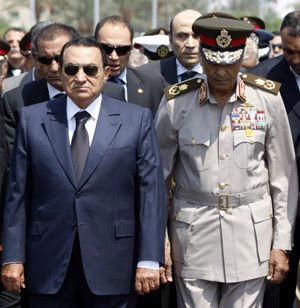 "The threat by the Egyptian justice minister, Abdel-Aziz al-Gindi, that law-breakers in the country will face "an iron fist" after Muslim-Christian violence at the weekend is a worrying one.

The sequence of events at the Saint Mena Coptic Christian church is still unclear, but certainly this kind of communal violence in Egypt has a long and disturbing history. It's right that the authorities take a zero-tolerance approach to all signs of co-ordinated violence against the country's small Coptic Christian population. But an iron fist? And hauling nearly 200 people before military courts?

This all smacks of Mubarak-era authoritarianism. And it's just the latest instance of Egypt's caretaker military rulers behaving in a draconian fashion while the world looks away.....

Up to 10,000 people were held in administrative detention under longstanding emergency law powers in the final period of Mubarak's rule and some of these have now been released (1,659 by the middle of March). Yet the new Egyptian authorities have still not revealed exactly how many such prisoners are still held or set out a process for their release, even when there is a court order requiring it.

The unvarnished truth is that Egypt's jails have recently been filling up with men, women and teenagers and its new rulers are betraying the hope and promise of Egypt's massive February protests....."
Posted by Tony at 4:57 AM