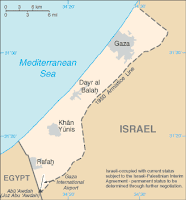 "....While living in Gaza and experiencing the situation on the ground, and
living in the midst of the Palestinian-Palestinian clashes between Fatah
and Hamas, I blame both parties for the Palestinian bloodshed and do not
give any excuse whatsoever for any of them, nevertheless I blame the West
for its economical sanctions against Palestine and the Israeli occupation
which on its withdrawal from the Gaza Strip it converted to a big boiling
pressure cooker.

That Israeli disengagement plan from Gaza was a new form of Occupation,
because Israel still controls Gaza from outside. It controls the borders
and the economy, and has a free hand to carry out various incursions.
Israel’s disengagement from Gaza was a step towards making an independent
Palestinian state impossible. Its consequence was to turn the Palestinian
cause into a charitable not a national issue. By making the Palestinian
people go hungry and lose all aspects of a dignified life, it is a step
towards demoralising them and making them in the end accept whatever
solution, however small and inadequate.

What do you expect of people living inside this pressure cooker, but all
sorts of aggression, despair, demoralization, and frictions against each
other? More than 60 people were killed, 30 in 3 days, and more than 70
were injured in different parts of Gaza. Most people stayed inside their
homes, one man was killed inside his home, many buildings in the Remal
area where I live were hit by random shooting, many residents left their
homes seeking safer areas, but where are those safe areas, when no place
is safer than any other?

It is mid-term holidays for the children of Gaza, 2 weeks holiday, no
regular electricity, no safe streets to run in, no proper places to play,
no safe homes to stay in, and no proper food to eat. Life continues and
the most dangerous time is when people start to lose faith and hope, and
have no vision for the future.

With your solidarity, with the solidarity of all those good people
worldwide who hate to see injustice and aggression, and continue to work
for a better world, I can keep my hope and vision for a better future, and
try to transmit those feelings to the others here to keep them strong.

I still count on you for a better future for the Palestinian people, the
women, the children who deserve better lives.

From Gaza with love