Finally! A Decent Article By Fisk About Lebanon 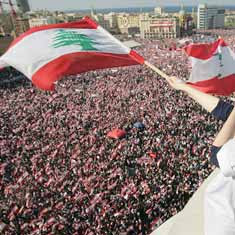 Please spare me the word 'terrorist'

My favourite line of the week came from the "security source" - just how one becomes a "security source" remains a mystery to me -- who announced: "Terrorists are always looking for new ways to strike terror... There is no end of the possibilities where terrorists can try to cause terror to the public." Well, you could have fooled me.

Lebanon is as good a place as any to find out what a load of old tosh the "terror" merchants talk. For here it is that the hydra-headed monster of Iran is supposedly stalking the streets of Beirut, staging a coup against Mr Siniora and his ministers.

Sayed Hassan Nasrallah, the Hizbollah leader, is the man Israel spent all last summer trying - vainly, of course - to kill, his black-bearded, turbaned appearance on Hizbollah's own TV station a source of fury to both Ehud Olmert and - nowadays - to Siniora's men in government.

Now it's true that Nasrallah - an intelligent, former military commander of Hizbollah in southern Lebanon - is developing a rather odd cult of personality. His massive features tower over the Beirut airport highway, a giant hand waving at motorists in both directions. And these days, you can buy Hizbollah T-shirts and Nasrallah key chains. But somehow "terror" is not quite the word that comes to mind.

This is partly because the tens of thousands of Shia Muslims whom Hizbollah represents are staging a social revolution rather than a coup, a mass uprising of the poor who have traditionally been ignored by the great and the good of Lebanese society.

The men in their tent city downtown are a powerful symbol in Lebanon. They are smoking their hooker pipes and playing cards and sleeping rough next to the shining new city which Rafiq Hariri rebuilt from the ruins of Beirut - a city to impress foreigners but one in which the south Lebanese poor could not afford to buy a cup of coffee.

Hariri's theory - or at least this is how he explained it to me before his murder - was that if the centre of Beirut was reconstructed, the money which it generated would trickle down to the rest of Lebanon.

But it didn't trickle. The bright lights of downtown Beirut were enjoyed by the rich and purchased by the Saudis and admired by the likes of Jacques Chirac but they were not for the Shia. For them, Hizbollah provided the social services and the economic foundation of its part of Lebanon as well as the military spearhead to strike at Israel and demand the return of Shebaa Farms.

The Lebanese government may have its troops mixed in with the new UN force in the south but no one doubts that Hizbollah remain in their villages, as powerful and as influential as ever. Harirism, it seems, failed and now Hariri's old friend Siniora - who, by the way, was never elected (he was appointed to the prime minister's job although you'd never know if from watching Western television) - has returned from Paris with millions of dollars to sit once more in his little "green zone", surrounded by barbed wire and soldiers and, outside the gates of his serail, by the poor of southern Lebanon and the suburbs of Beirut.

Hizbollah's electoral partners are also interesting. General Michel Aoun - whom the Americans have not yet got round to calling a "terrorist" - is the Christian leader who allows Nasrallah to claim that the opposition is non-sectarian. Aoun's supporters were involved in pitched battles with Samir Geagea's Phalangists last week and what was striking was how poor many of Aoun's Christian supporters also appeared to be. Indeed, Aoun was himself born in the same southern slums of Beirut which is Hizbollah's power base and his constant refrain - that the government is corrupt - is beginning to take hold among the disenfranchised Christian communities in the east of Beirut.

The fact that Aoun is also a little cracked does not change this. Even when this week he produced a doctored photograph supposedly showing an armed Phalangist on the streets - the image was of a Hizbollah gunman, originally taken during last summer's war but stuck on to a photograph of crowds on a north Beirut roadway - his loyal supporters did not desert him. Nestling beside their tents in central Beirut are canvas homes containing Lebanese communists - how friendly the old hammer and sickle seems these days - and a host of lesser groups which may or may not come under Syria's patronage.

Of course, the crisis in Lebanon is also about Iran and Syria, especially Iran's determination to damage or destroy any Middle East government which has earned America's friendship. In the growing, overheated drama being played out between Washington and Tehran (and Israel, of course), Lebanon is another board game for the two sides to use. America thus lined up to defend Lebanon's democracy - though it didn't care a damn about it when Israel bombarded the country last summer - while Iran continues to support Hizbollah whose government ministers resigned last year, provoking the current crisis.

Nasrallah is said to have been personally shocked by the extent of the violence and hatred manifested in last week's miniature civil war in which both Sunni and Shia Muslims used guns against each other for the first time.

But they too emerged from the slums to do battle with their co-religionists and I rather suspect that - when this latest conflict is over - there will have to be a serious evaluation of the explosive nature of Lebanon's poverty belts, a re-examination of a country whose super-wealthy launder the money which never reaches the poor, whose French restaurants and Italian designer shops are for the princes of the Gulf, whose government - however democratically elected (and Washington still doesn't seem to understand that sectarian politics mean that Lebanon cannot have a normal democracy) - seems so out of touch with its largest religious community.

But as the story of Lebanon continues, please spare me the word "terrorist"."
Posted by Tony at 6:00 AM