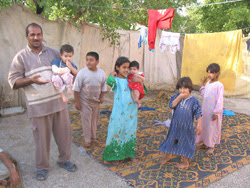 UN Office For The Coordination Of Humanitarian Affairs

"BAGHDAD, 1 Feb 2007 (IRIN) - The number of Palestinians stranded at the Iraq-Syria border has risen to 700 as more refugees flee the escalating violence in Baghdad, the United Nations Refugee Agency (UNHCR) said on Wednesday.

"Another 50 Palestinians have fled to the Iraq-Syrian border following a traumatic week in Baghdad, bringing the total number stranded at the frontier to about 700," Jennifer Pagonis, UNHCR spokeswoman, said at a press briefing in Geneva......

UNHCR said a group of 356 Palestinians has been in no-man's land between Iraq and Syria since May, and is living in a makeshift camp that was erected there. The second group of more recently arriving Palestinians, which now numbers around 340, is stuck in another improvised camp, al-Waleed, on the Iraqi side of the border.

Syrian authorities continue to deny access to all Palestinians, leaving them stranded in these camps, UNHCR added.

UNHCR is concerned that Palestinians have been systematically targetted and threatened by authorities and militias. The refugee agency said they face constant threats from death squads. 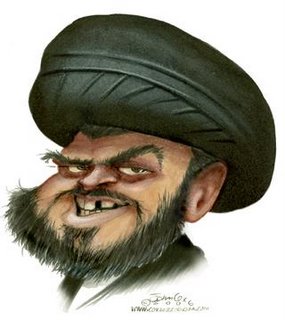 "More Palestinians are leaving Baghdad on a daily basis due to ongoing violence against them and they are heading to the borders where they are suffering a lot," Dhilal al-Kasous, the Palestinian Charge d'Affaires in Baghdad, told IRIN.

"They are living in tents in very dismal conditions during this cold weather season, and have no access to potable water and medicine. Their children have left schools and they will be an uneducated generation in the future," al-Kasous said.

He added that fewer than 15,000 Palestinians are now left in Baghdad where they do not venture out of their houses for fear of violent attacks by militia and harassment by Iraqi police.

On 16 January, Iraqi security forces broke into two buildings in Baghdad that are rented by UNHCR for Palestinian refugees and arrested 30 men. But they were released shortly.

In another incident in Baghdad's central district of al-Batawyen, Interior Ministry forces broke doors and windows of a building and arrested 17 Palestinian men. A third incident took place in al-Amin district in the eastern side of the capital on the same day and 13 Palestinian men were apprehended by Iraqi security forces.

"We again urge the international community, including neighbouring and resettlement countries, to help find a humane solution for these refugees who are persecuted inside Iraq and have nowhere to go," UNHCR said. "
Posted by Tony at 5:39 AM