The massacre of Najaf 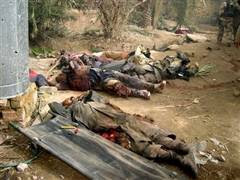 An Important Note
From Imad Khadduri

"An email from a friend:

"What is certain from the information we have (see the different 'official' versions of this massacre then scroll to under the two pictures for the eye-witness story) is that processions of Arab shiite tribes were walking (as part of the Ashoora tradition) to Najaf: The Hawatim and The Khazael. Both tribes are known for their Arab national and patriotic positions. Khazael for example had played an important role in supporting Iraq's position toward Palastine in 1948.

Had they the intention to attack the Hawza symbols in Najaf? I cannot be affirmative but there is a story from inside iraq saying that they have demanded that all Iranians in the Hawza are to leave Najaf.

Were they Mahdists? This may be a simple propaganda to isolate them among other shiites and in the eyes of the outside world.

In any event, this massacre is of great significance.

First: There were many indications and information that the Hakim-Maliki-Sistani alliance is becoming very isolated among the Arab shiite tribes and cities throught central and southern Iraq. For a while, Saddr (in Arabic) was an alternative but since he participated in the elections, returned recently to rejoin the parliment after demanding a scheduled withdrawal of occupation forces while his followers participate in wide spread attacks against the sunnis, he is losing his influence among Iraqi shiites. Iraqi nationalism is stronger than sectarianism.

Secondly: The use of lethal force by the Americans, like what they did in in Falluja, against important Arab tribes will spread the anti American anti Iranian resistance. The myth of the shiites being united behind Sistani is finished. More and more of Arab shiites will join the resistance.

The occupation and its puppets have nothing to the Iraqi people but blood, death, lies and destruction.

Questions do come to mind? How can more than 300 'terrorists' remain hidden in a field near Najaf for so long, and are then suddenly discovered and obliterated? If they are claimed to be such well-trained militants, how come the Iraqi police and military casualties are so low in comparison with near 260 dead 'terrorists'?"
Posted by Tony at 7:59 AM