A Symphony of Silent Voices 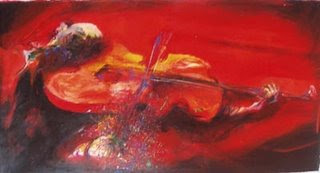 "......Mayssaloon, my very close relative, a beautiful young woman whose name means gaiety, got married three years ago to a nice shi'a boy. They were happy until...
Mayssaloon gave birth 3 days ago at home in Al Azamiyah ( a predominantly sunni neighborhood - here we go again...)
When she told us the good news about her pregnancy, our faces dropped.
My first reaction was " How could you ?" but I bit my tongue and said nothing.
Then I realized how "nazi" it was of me to even think that way. She is newly wed and she wants a family. For her life has to go on and she had hopes ...until... until little Hassan was born.
Like many women in Iraq and in Baghdad in particular, any pregnancy has to end in a forced cesarian in a hospital (if you can call it a hospital that is - only God knows the rate of septicemia after surgeries today in Baghdad) or deal with it alone at home.
Al Azamiyah has been under very heavy shelling for the past four days, shelling from the iranian backed militias in their rabid campaign of ethnic cleansing.
Again , no water, no electricity, no food. Mayssaloon gave birth at home, she was hemorrhaging..no midwife available. Someone finally brought in a nurse. She said take her to the hospital now.
Again, her father braved the mortar deadly shells and took her to the nearest hospital.
Impossible, they said . No beds available, too many injured already...go home.
Mayssaloon and little Hassan made it home , but Hassan was too pale and hardly breathing and Mayssaloon was heavily bleeding. They also noticed a strange looking growth on his tiny body.
Grandpa took him to a doctor, who ran some blood tests, but by then it was too late...Hassan eclipsed like a frail small flame...Hassan is gone for ever...and Mayssaloon is still bleeding...
He uttered a tiny cry and went.
Mayssaloon sits in bed all day and all night in the cold and in the darkness , her silence is deafening and when she speaks , she just cries loudly, sighs and goes back to mute .
And so it goes ...for the silent voices in Iraq.

Postscript : As I was writing this, I remembered a letter received from a western friend of mine. She just go pregnant and was looking foward to feel her birth pangs , an affirmation of her feminity. She checked herself in into a very special clinic so she can give birth in a warm cosy water pool, the natural way,hence diminishing the traumas of childbirth to her and her child.
I can't but manage an ironic smile now.
Where is Condi Rice, the midwife of the New Middle East? We just had Death Birth pangs here...in a pool of warm blood."
Posted by Tony at 5:18 AM